Blogs > Steve Hochstadt > Photographs From My First Trip to China

Photographs From My First Trip to China


Steve Hochstadt is a professor of history emeritus at Illinois College, who blogs for HNN and LAProgressive, and writes about Jewish refugees in Shanghai.

I went to China in 1989 with a group of former Jewish residents of Shanghai to celebrate the first open Passover Seder in Shanghai in decades. Our visit, which included the first Israeli journalists allowed into Communist China, was part of the more general liberalization in Chinese politics and economics. Passover began on April 20.

I was very happy to be on this trip, because I was just beginning to research the flight of about 18,000 Jews from Nazi-occupied Europe to Shanghai after 1938. My grandparents had been among them, leaving Vienna in 1939. I was able to do eight interviews, see the neighborhoods where my fellow travelers had lived, and even get into my grandparents' former apartment. We met Chinese scholars who were doing research on Jews in Shanghai.

I like to wander around new cities with my camera. In Shanghai, and a few days later in Beijing, I saw things I didn't expect: students protesting the lack of freedom and democracy in China. Nobody I asked knew what was going on. I took these photographs, and a few others. I wish I had taken many more. These images were originally on 35mm slides, and were printed by Jim Veenstra of JVee Graphics in Jacksonville. 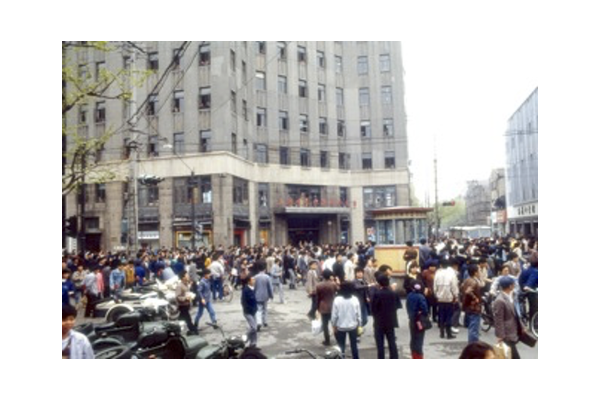 I was wandering in downtown Shanghai when a wave of young people came out of nowhere and marched past me. I had no idea what they were doing. Chinese streets are often filled with bicycles and pedestrians, but this was different. Protests had begun in Beijing a week earlier, and had spread to other cities already, but we knew nothing about them. 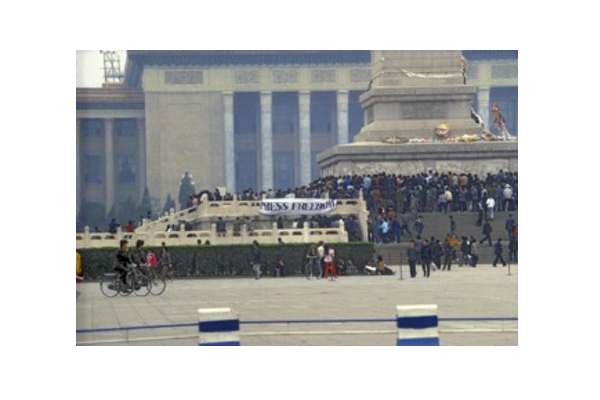 After a few days of personal tourism and memories in Shanghai, our group flew to Beijing to be tourists. Tiananmen Square is in the center of the city, right in front of one of most important tourist sites, the Forbidden City, home of the emperors for 500 years. Students had been gathering there for over a week already. The sign in English advocating A Press Freedom was surprising, since there were very few signs in English at that time. The flowers on the monument are in memory of Hu Yaobang. 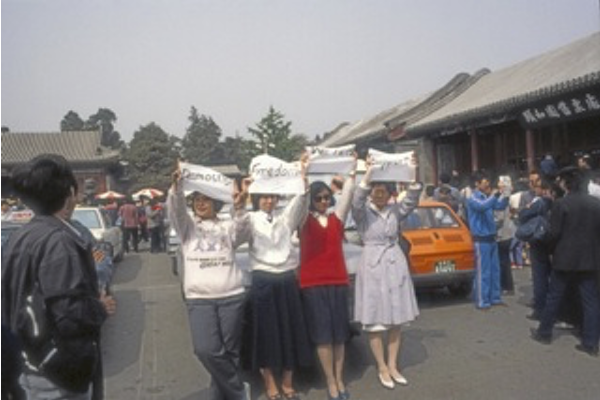 The next day we visited the Summer Palace on the outskirts of the old city, built in the 18th century as a lake retreat for the imperial family. Busses poured into the parking lot with school children and adult tourists. At the entrance, students displayed these signs in English for every visitor to see, requesting support for their movement. Our guides could not or would not comment on them. 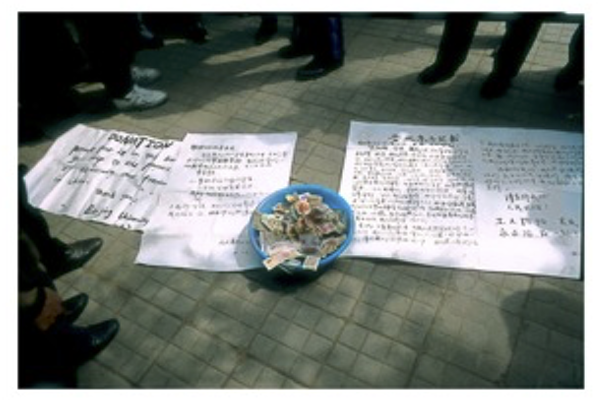 Inside the grounds of the Summer Palace, students were collecting funds for their cause: democracy and freedom in Chinese life. The bowl is filled with Chinese and foreign currency. 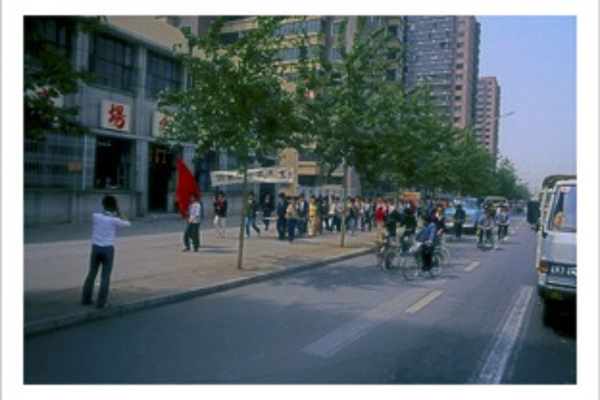 I'm not sure exactly when or where I took this photograph. We were taken around to various sites in a bus, including some factories in the center of Beijing. We were not able to keep to the planned schedule, because the bus kept getting caught in unexpected traffic. I believe I took this photo out of the window of our bus, when it was stopped. The bicyclists and the photographer in front of the marchers show the public interest in these protests.

Our Chinese trip was supposed to last until April 30, but the last few days of our itinerary were suddenly cancelled, and we were flown to Hong Kong. There was no official public reaction to the protests we saw, but government leaders were arguing in their offices over the proper response. I was struck by the peaceful nature of the protests I had seen and the interest shown by the wider Chinese public. The protests spread to hundreds of Chinese cities in May, and Chinese students poured into Beijing.

On May 20, the government declared martial law. Student protesters were characterized as terrorists and counter-revolutionaries under the influence of Americans who wanted to overthrow the Communist Party. Those who had sympathized with the students were ousted from their government positions and thousands of troops were sent to clear Tiananmen Square. Beginning on the night of June 3, troops advanced into the center of the city, firing on protesters. Local residents tried to block military units. On June 4, Tiananmen Square was violently cleared. "Tank Man" made his stand on June 5.

All the Communist governments in Eastern Europe were overthrown in 1989. The Soviet Union collapsed in 1991. The Chinese government survived by repressing this protest movement. Since then all discussion of the 1989 protests is forbidden. Western tourists on Tiananmen Square are sometimes asked by local residents what happened there.

I wonder what happened to the students pictured in these photos.