When the Western Wall Was A Battleground For Jewish Rights

Moshe Phillips is national director of Herut North America’s U.S. division and a candidate on the Herut slate in the 2020 World Zionist Congress's US elections; Herut is an international movement for Zionist pride and education and is dedicated to the ideals of pre-World War Two Zionist leader Ze'ev Jabotinsky. Herut's website is https://www.voteherut2020.com/. 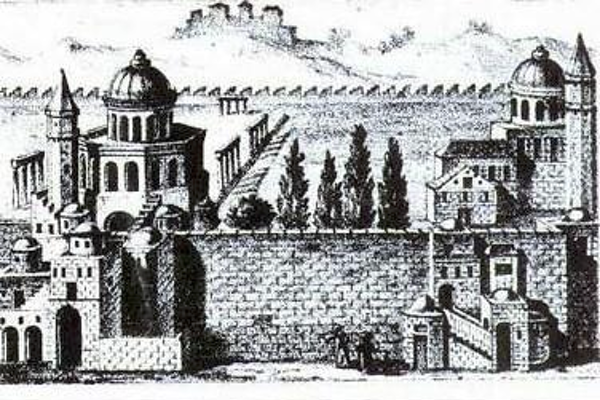 The book The Western Wall Wars (Whirlwind Press, 2019) details the stories about the young men who, from 1930 to 1947, violated British regulations which banned the sounding the shofar at the Western Wall at the conclusion of Yom Kippur services each year.

Moshe Zvi Segal was the first of these young men and he was arrested for sounding the shofar. He blazed a path forward for young Zionist revolutionaries to follow in what was the longest running Zionist underground operation in its history.

Rabbi Moshe Segal (1904-1985) was the quintessential Zionist rebel and was a key figure in the histories of Betar, Brit HaBiryonim, Irgun, LEHI (Stern Group), and Haganah and he was the founder of the Brit HaShmonaim religious youth movement. All of these organizations were part of the movement initiated by Zev Jabotinsky (1880-1940) who was the greatest pre-World War Two Zionist leader after Theodor Herzl. Segal himself was a close comrade of Yitzhak Shamir when the later prime minister was a 1940s commander of LEHI.

Author Zev Golan knew Rabbi Segal personally and interviewed him many times in addition to attending his lectures and translating his writings. Golan is one of only a handful of Americans who made it their business to seek out the aging heroes of the Irgun and LEHI and to get to know them, their stories, and the ideas that animated their deeds while they were still alive.

The Western Wall Wars is subtitled How the Wailing Wall Became the Heroic Wall and is a direct result of Golan's relationship with Segal. In 1930, Segal was the first individual to violate the British regulations against the sounding of the shofar at the Western Wall at the conclusion of the Yom Kippur service. Until 1947, a volunteer from the Irgun, Betar, or the Brit HaShmoniam sounded the shofar every year–often after receiving personal training from Segal in both the mitzvah of shofar as well as how to elude the British police. The British authorities went to great lengths to stop the shofar from being sounded. British efforts to stop Jews from performing a mitzvah probably will seem impossible to fathom to today’s readers and that is just one of the reasons this book is so important.

The book explains how Segal and the others who followed in his footsteps transformed the Western Wall from a site of wailing to one of national pride. The book reveals the details of the actual operations at the Western Wall and the full stories of the volunteers who were arrested, escaped from prison, and/or deported to prisons in Africa. Some were involved in the 1946 Irgun attack on the King David Hotel and other Irgun or LEHI operations. Many later fought in Israel's wars. The Western Wall Wars also covers Arab attempts during the 1920s to drive the Jews from the Western Wall and the Jewish response to the Arab effort. Segal was a leader of the opposition in this area as well.

The emerging Jewish Underground in the pre-1940 period was a time when the Jabotinsky movement suffered the slings and arrows of the leftist establishment and bravely soldiered on. The light of history has shown that the stances of the Jabotinsky Zionists were correct. If Jabotinsky had been more successful, perhaps the tragedies of the Holocaust and the loss of life in the 1948 war could have been lessened. Progressive historians have always downplayed--and often completely removed–the role of Jabotinsky's movement from their histories of Zionism. This book helps to preserve authentic history and that is a highly praiseworthy thing.

The story of the Zionist underground in the pre-state period told here also helps the reader to understand the ideology that guided these warriors as they fought for Jewish rights and rebelled against the British Empire.

And this is no small thing. The ideology of Jabotinsky, Rabbi Segal and their comrades is just as instructive and relevant now as it was many decades ago--probably more so.

Now that the Jewish People possess a sovereign Jewish State, the concept of just what a Jewish State should rightly be is of vital importance. Avrum Burg, a former Speaker of the Knesset who was also a former chairman of both the World Zionist Organization and Jewish Agency, said "To define the state of Israel as a Jewish state is the key to its end," in a June 2007 interview with Israel's Haaretz newspaper. Now, we live in a time when many radical Jewish organizations in the U.S. struggle to redefine Israel as something other than a Jewish State.

For today’s Zionists to be truly successful in a way that transcends politics and elections–in a nation transforming way–we must reevaluate the philosophy of the heroes who fought for Israel’s freedom and Jewish rights in Jerusalem. These heroes were not only the ideological heirs of Jabotinsky but the champions who brought Jabotinsky's deepest hopes into reality.